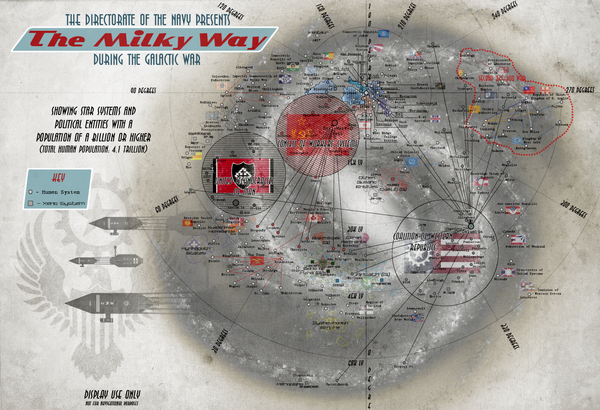 Ever since man descended from the trees of darkest Africa, he has always looked to the stars in wonder. Human history is filled with men that dared to dreamed that perhaps, one day, their descendants would soar among the heavenly bodies and perhaps leave their forefather's imperfections on Earth. That maybe, just maybe, the burning hatreds and deep-seated animosities that for millennia tinged the soil of Terra red with blood, that the children of man would not be men, but something different, something better.

But the hopes of these men would come to nothing. Sadly and predictably, man brought his conflicts to the stars. Mankind's flight from its mother world was not conducted to flee its wars, but rather to escalate them. The great powers of the time sought out any and every field in which they could prove their superiority, and space was no exception. The conflict between communism and capitalism sent men and weapons to Luna, Mars and beyond. Eventually, even the Solar System was too small a battlefield and man's wars expanded even further and further until the inevitable happened and mankind was plunged into centuries of darkness.

But man rebuilt. The human race, as stubborn as it is violent, refused to live like animals in the post-war world. From the ashes and ghosts of the past, those who were fortunate enough to survive the inundation of civilization's centers toiled endlessly, expanded even further, until man's glory in the stars was restored. And, slowly but surely, the old hatreds that simmered in the shadows after the Collapse reemerged and took control of man's affairs. Once again, the sons and daughters of Terra march to war.

This timeline is the work of rvbomally and was originally posted at Alternatehistory.com.

Community content is available under CC-BY-SA unless otherwise noted.
Advertisement